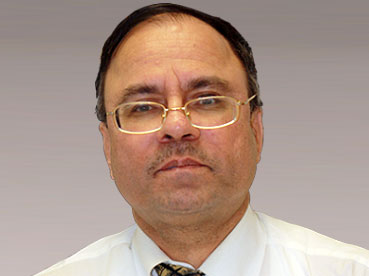 When he first took care of cancer patients during an externship at the Veterans Administration Hospital, Daya S. Sharma knew they were not like “ordinary patients.” And, he liked that.

Dr. Sharma developed relationships with these patients and their families. He was in their lives, and they were in his for much longer than many other patients he had treated in his native India.

“When you interact with patients and their families to make decisions on how to take care of them and take care of their end-of-life issues it can be frustrating, but at the same time rewarding,” Dr. Sharma said. “It’s always important to get the family involved in the patient’s treatment. You need to satisfy the family’s (questions about why) the patient is not getting better. It always pays to spend time with the patient so the family understands.”

“The treatments are always improving,” he said, adding that patients with a number of cancers that cannot be cured are living longer with a better quality of life.

Dr. Sharma said he sees more cancer in younger patients today than he did a decade ago when he first began in the field. He attributes this to better diagnosis at earlier stages.

“Sometimes you feel bad when treating young patients, but it is rewarding to make their end very peaceful,” Dr. Sharma said.

Dr. Sharma immigrated to the United States in 1981 after practicing medicine in India for three years. While there, he was employed by the government and only saw outpatients.

He has observed that patients in the United States receive a higher level of care — it is delivered faster and is more sophisticated. “Medicine is more cutting edge here,” Dr. Sharma said. “Here we use sophisticated diagnostic tools as part of routine practice. I can hardly imagine practicing medicine without the sophisticated studies we use, especially in hematology/oncology.”

In addition to his busy clinical practice, Dr. Sharma said he enjoys his role as a teacher. “The residents and interns (at Washington Hospital Center) are very good. They like to be taught,” he said. “I really love (teaching). I always want to be known as a good teacher.”

Dr. Sharma also strives to earn the respect of his teachers, colleagues and patients. “I am very impressed by Dr. (Lawrence) Lessin (medical director of the Cancer Institute) and Dr. Priebat (section director and program chair for hematology/oncology) – and their knowledge and the way they practice, as well as their involvement in the fellowship program,” he said. “They are my role models. I have followed most of their techniques.”

Dr. Sharma lives and breathes his work. But he enjoys traveling, and his vacations are usually incorporated into the many medical conferences he attends each year. He prefers to relax by reading the numerous medical journals that arrive at his office each week.

He and his wife Madhu, a banking manager, have a 17-year-old son, Ankur, who is a high school senior. Dr. Sharma said his son, who will attend the University of Maryland in the fall, entertained the idea of becoming a physician, but “he sees me coming in late and leaving early and thought otherwise. He’ll probably study computers.”